„O Isuse izranjeni…” (O, wounded Jesus) is the title of the concert presenting the current state of church folk singing in Lika and Gacka areas. The repertoire of the groups that will perform in the concert is focused on the vocal heritage and folk devotion practices during Lent. There are several reasons why we chose to present this particular area. The historical and current conditions of the region are excellent examples of (co)existence of migrants who settled in the area. On the other hand, the current condition of sacral performing practices in Lika and Gacka areas had until now not been encouraging to make us investigate the local church music practices of the region. This was primarily because of extremely “turbulent” historical events in the area that have left a permanent mark even on church singing. The area that led the promotion of culture and literacy in the Middle Ages until Ottoman invasions was divided between the dioceses of Senj (1169), Otok (1449), Krbava (1185) or Modruš (1493). This is a good opportunity to remember the year 1248, when the Bishop of Senj received a personal right to hold services in the Old Church Slavic language, which also strongly supported his Glagolitic practices. The area became the greatest stronghold of Glagolitic culture in general, which explains why the first known Glagolitic print shop on Croatian soil opened in Senj (1494) (Bogović 2001:23). At the time, the region was home to active Benedictine, Franciscan, Dominican, Pauline, and Augustinian orders. The dioceses of Senj and Modruš or Krbava existed as independent church entities until 1969, when the archdiocese of Rijeka and Senj was formed by Pope Paul

After the “turbulent” Middle Ages, wars and migrations of the more recent period have left their mark on the population, both in terms of composition and number. The same trend continued in the period after World War II. In other areas of Croatia, the link with tradition and former church practices was continued by women/singers, but in Lika, this was less pronounced. Spiritual revival started only after the Homeland War, when the musical revival continued the traditions of the standard church repertoire from available songbooks. This is best seen in the performances of women singers from Ličko Lešće, who learned their current church singing practices during exile, thus creating the musical and vocal foundation for their current repertoire and performance:

“The 1990s were marked with the plight and sufferings of the Croatian people, but it was also the time when bonds were created and people came together. The war and hostile activities in the Gacka Valley forced the students of the Otočac High School and the elementary schools from the area in and around Otočac and Brinje to move to Senj and Bribir in order to attend school. Father Ivan Friščić, who was the parish priest of Sinac, and sister Cecilija Sabljak of the Congregation of Sisters of the Most Sacred Heart of Jesus, gathered children for religious education, holy masses and singing practices in the Zagora tourist resort of Novi Vinodolski, where both the children and their teachers were located at the time. In the early 1990s, before the Homeland War, sister Cecilija Sabljak would come to the parish of Ličko Lešće to prepare the children and youth for their First Communion and the Confirmation ceremonies. Father Ante Cvitković was the parish priest of Ličko Lešće at the time and gathered the children and youth for religious education, as well as for regular singing practices held by visiting father Mile Rajković.” (Silvija Rubčić Kovačić)

Along with their regular singing activities in the parish, we also tried to represent different musical traditions related to Lent. Initial field research was conducted in Donji Lapac, Perušić and Kuterevo by researcher Joško Ćaleta of the Institute of Ethnology and Folklore Research with the help of students from the Faculty of Theology in Zagreb (Ivan Buljan, Mihael Mojzeš) and Vera Dasović from the Otočac Cultural Center. We worked with the members of local folklore groups, since they are usually the most active bearers of tradition in their local areas. The group from Donji Lapac is especially interesting, since they represent Croats forcedly relocated to the area during the Homeland War from central Bosnia, i.e. the region that was once the seat of Bosnia’s last queen Katarina Kosača – Kotromanić. The women of Kraljeva Sutjeska still wear black headscarves in her honor. The people of Kraljeva Sutjeska took their traditional costumes, customs and church singing tradition created for centuries under the guidance of the friars from the Kraljeva Sutjeska monastery to the new homeland. In this concert, we will hear a selection of those songs. The groups from Kuterevo and Perušić had problems finding their “own” songs, since their churches mostly use the standardized newer repertoire from available songbooks. Through conversations with the villagers, we learned that the population of Kuterevo also moved to the area in the 19th century from the neighboring region of Gorski Kotar! The fact that the older traditions had been discarded through generations did not help us in our objective, but young enthusiasts (Ivan Starčević, Matej Šporčić) took on the challenge and mobilized older renowned women singers from their local areas who remember the songs of times past. The intention of performers is to show that even the oldest layers of (musical) tradition can be properly reconstructed and become an example of performing music and scene practices. 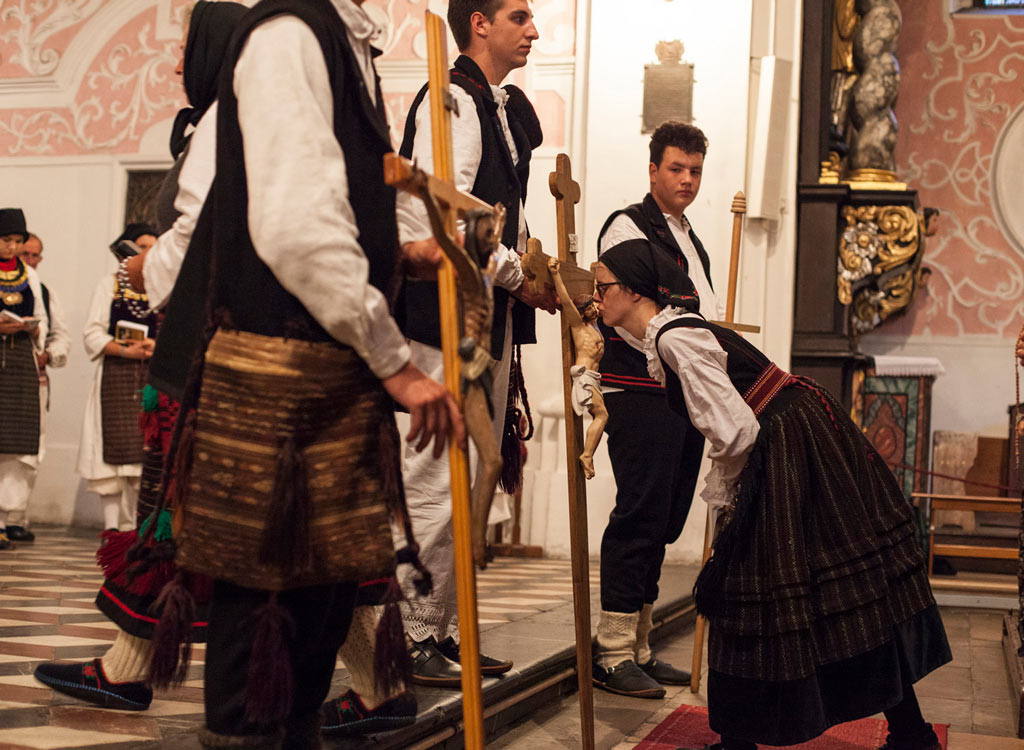 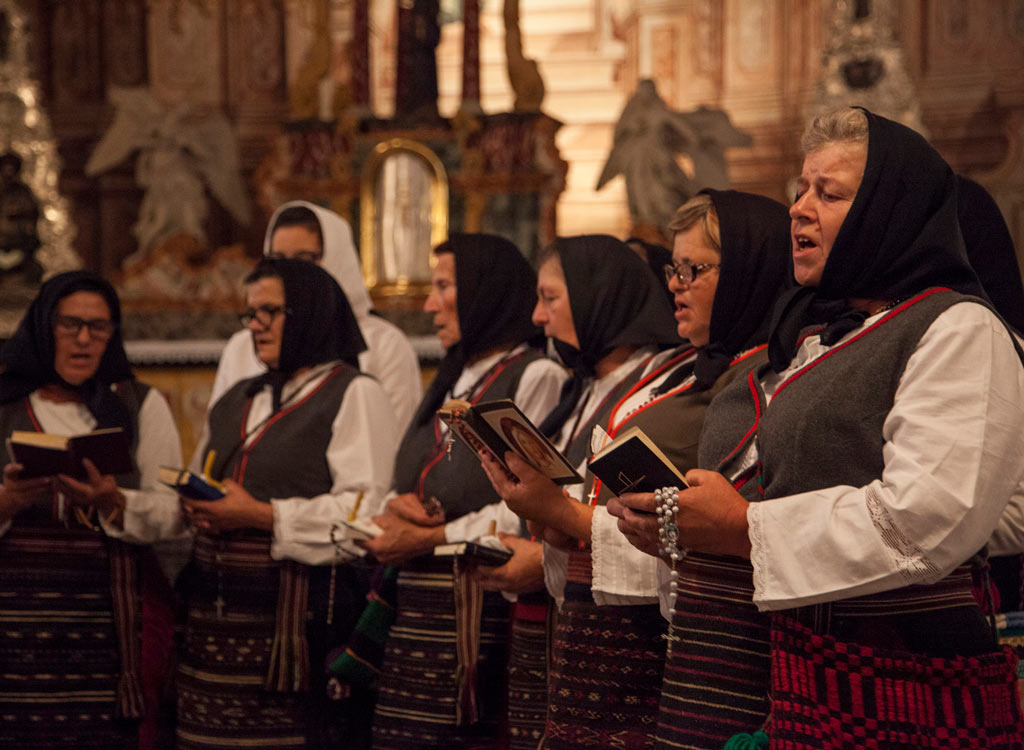 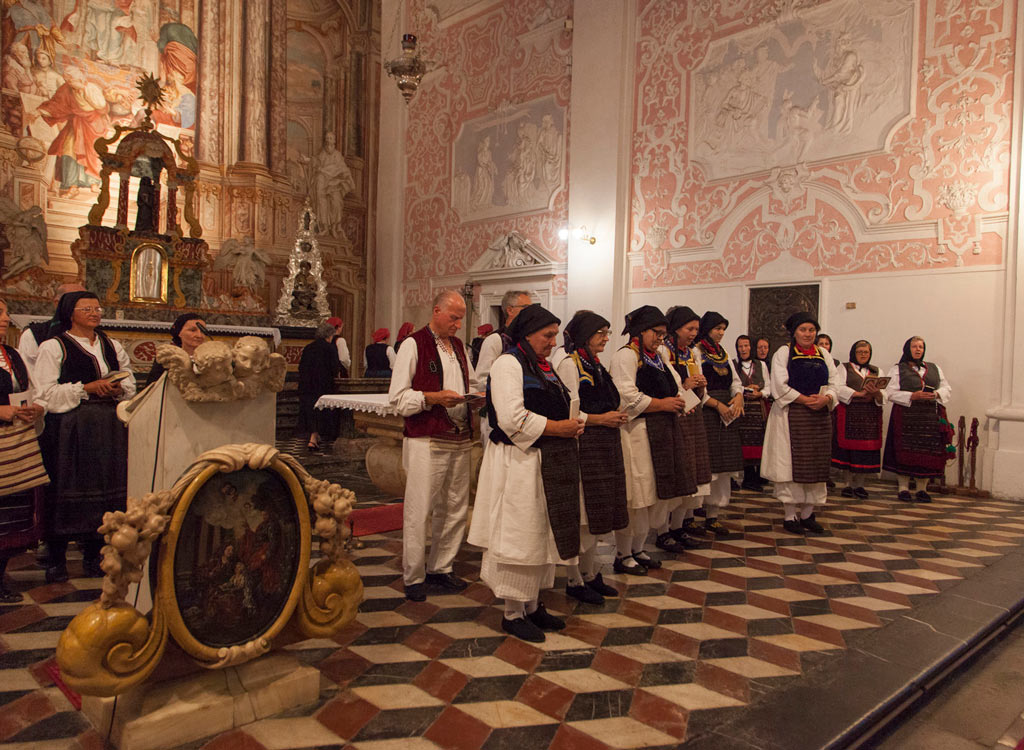 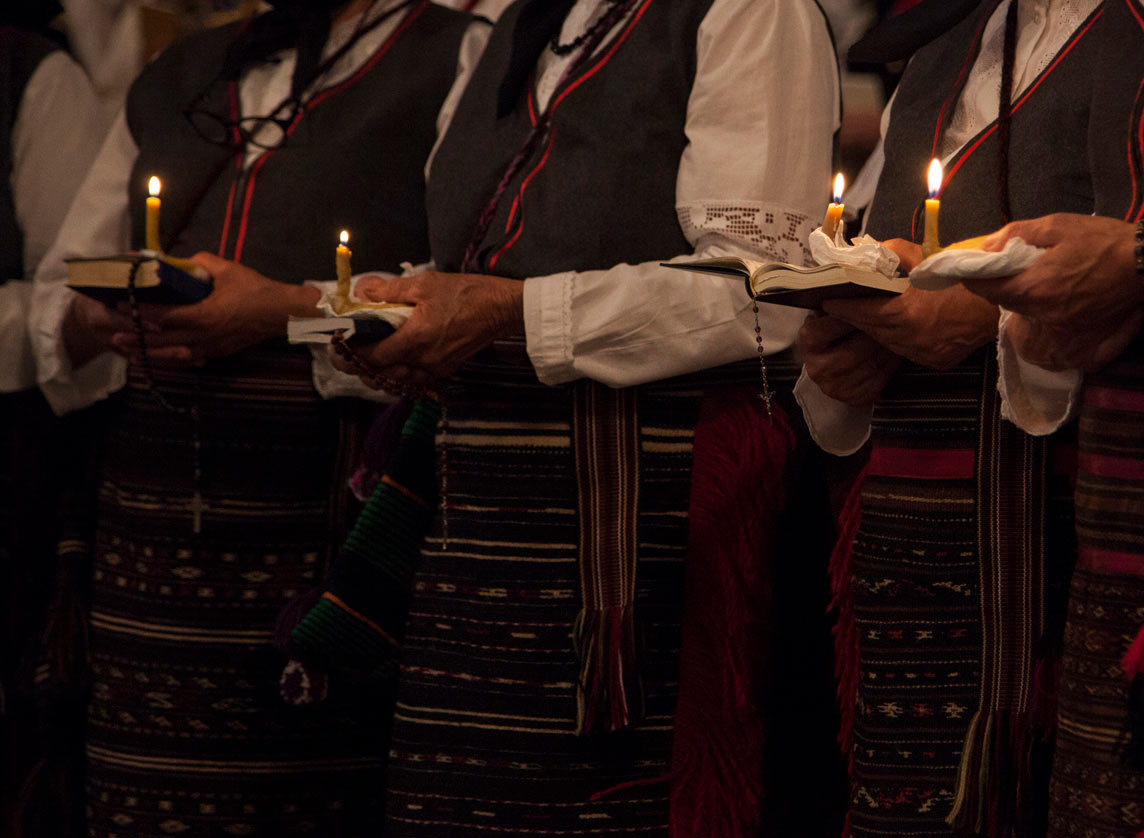