This year’s church folk music concert follows the central theme of the Festival – Croatian emigrant communities – and will be performed by Burgenland Croats, parishioners of the village of Neudorf (Novo Selo) from the Austrian province of Burgenland that the Croats call Gradišće. Croats have been inhabiting the area of Central Europe that is now divided between Austria, Hungary, Slovakia and the Czech Republic for more than five centuries. The northernmost group of Burgenland Croats inhabits the valley of Hat, which gave them the name of Hati to which the population of Neudorf belongs. The village is home to the group called “Hatsko Kolo”. Group members are also church singers who will present their interesting and very much alive tradition of church folk music, i.e. characteristic singing during liturgy that is accompanied by tamburitza music.

The Catholic Church and faith have played a significant role in the preservation of the Croatian language and the Burgenland Croats’ identity, especially through maintaining liturgy in their own language. King Ferdinand I granted the settled Croats the right to chose their own priests, gave them autonomy of church and an opportunity to hold ceremonies in the Old Slavic language from books written in the Glagolitic script. Those rights slowed down the process of Hungarization and Germanization of the Croatian people, at least during the

first 150 years, and distinguished them as Catholics in a predominantly different surroundings. Such rights had definitely influenced the later idiosyncrasy of church tradition that has been preserved for centuries, as well as church folk music of Burgenland.

The church songs sung by parishioners in the Burgenland Croatian language were most often lead by distinguished individuals – cantors. Singers and players at the concert in St. Catherine’s church are mostly members of the “Hatsko kolo” folklore group founded in 1994 when priest Branko Kornfeind joined the community. Born in Trausdorf, he became the parish priest of Pandorf in 1994, and then of Neudorf in 1996. Before his arrival to the area, the celebration of Mass had not been accompanied by tamburitza music – tamburitza was introduced by father Branko first in Pandorf and then in Neudorf. This introduction, however, did not put a stop to other traditions, so that the High Masses on Saturdays and Sundays are still accompanied by organ music. Current cantor Martin Miletich, geography and theology teacher, succeeded Georg (Jura) Kalinka in the position in 2002. Kalinka was a cantor and the headmaster of the local elementary school who lead the singing in Masses in Neudorf for fifty years. Martin Miletich emphasizes the important role of singing, both with and without instrumental accompaniment, in the religious life of the small community. Everybody participates in the songs and he believes that is the reason why numerous church songs have been preserved to this day. “We do not have silent masses, we always have songs,” parish priest Branko and cantor Martin point out. Martin also remembers with sadness the too early departed parish priest Karlo Reča (1986) who started every Mass with ten or fifteen minutes of singing. “He sang so well and would motivate all parishioners in song that we all truly enjoyed his Masses,” says Martin.

We evoked the memories of numerous processions together: Križevski dani (The Days of the Cross) before Va nebo zastupljenje (The Assumption), Corpus Christi always accompanied by tamburitza music, people dressed in Croatian traditional costumes, ognjobranci (firemen) joining the procession, the Way of the Cross – the procession with flags on Holy Saturday. We also remembered kolenda – the forgotten tradition of caroling that has been replaced by a Christmas concert on the Feast of St. Stephen. We concluded that tambura and maša are now the trademarks of the small community, symbols that hold it together and give it strength.

The concert will show the musical particularities throughout the liturgical year in Neudorf and the performers will try and illustrate the spirit of their village with their energetic performance. In most parts of the concert, the singers will be accompanied by tamburitza players, as is the custom during Service in their church. After the concert, the participants will perform a short program of their secular songs in the Gradec stage. 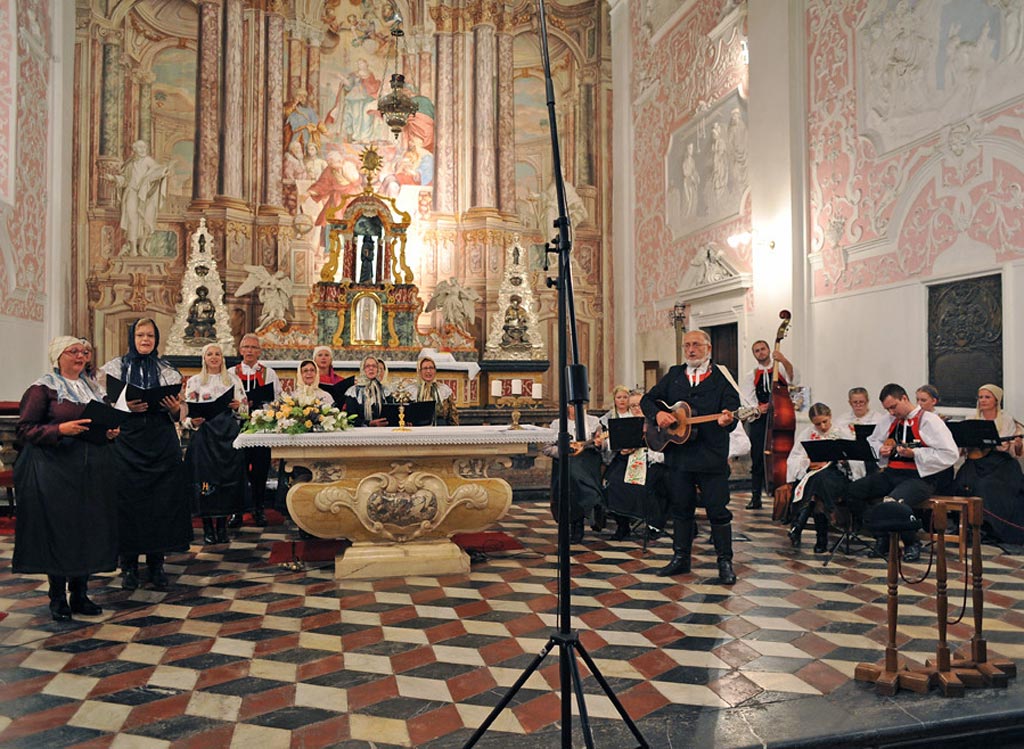 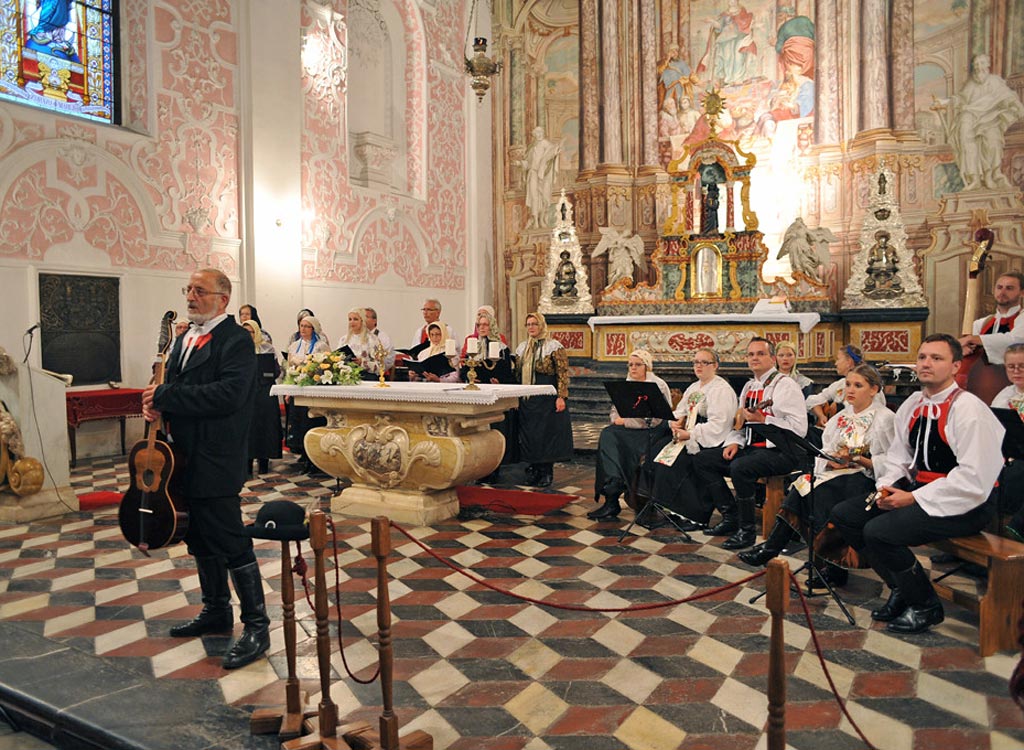 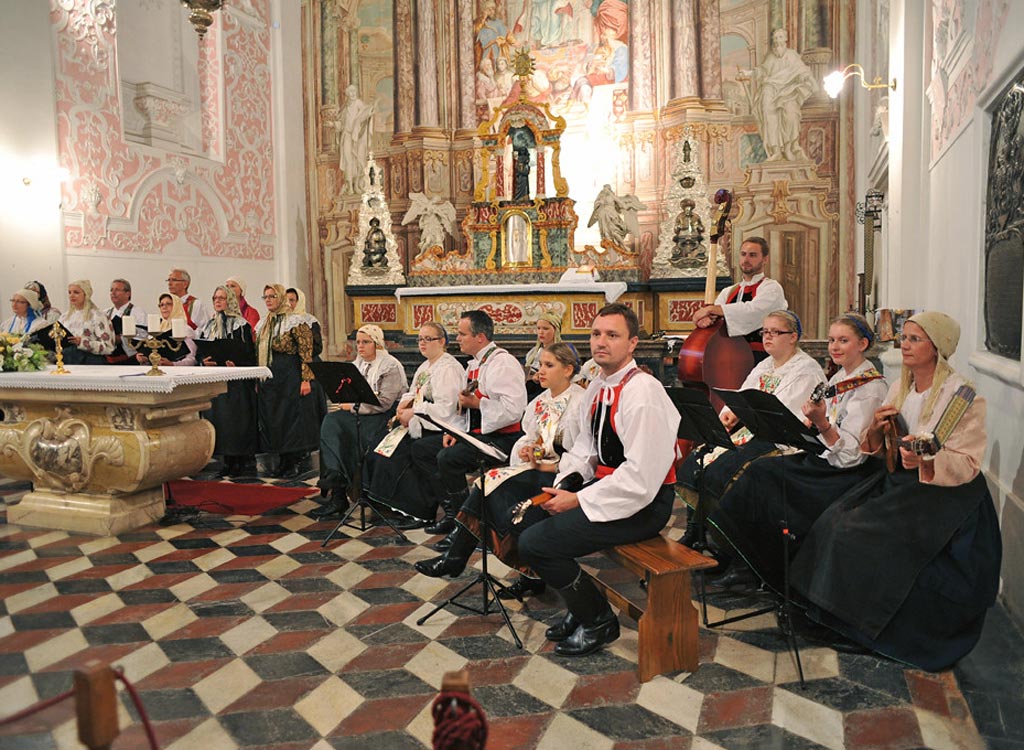 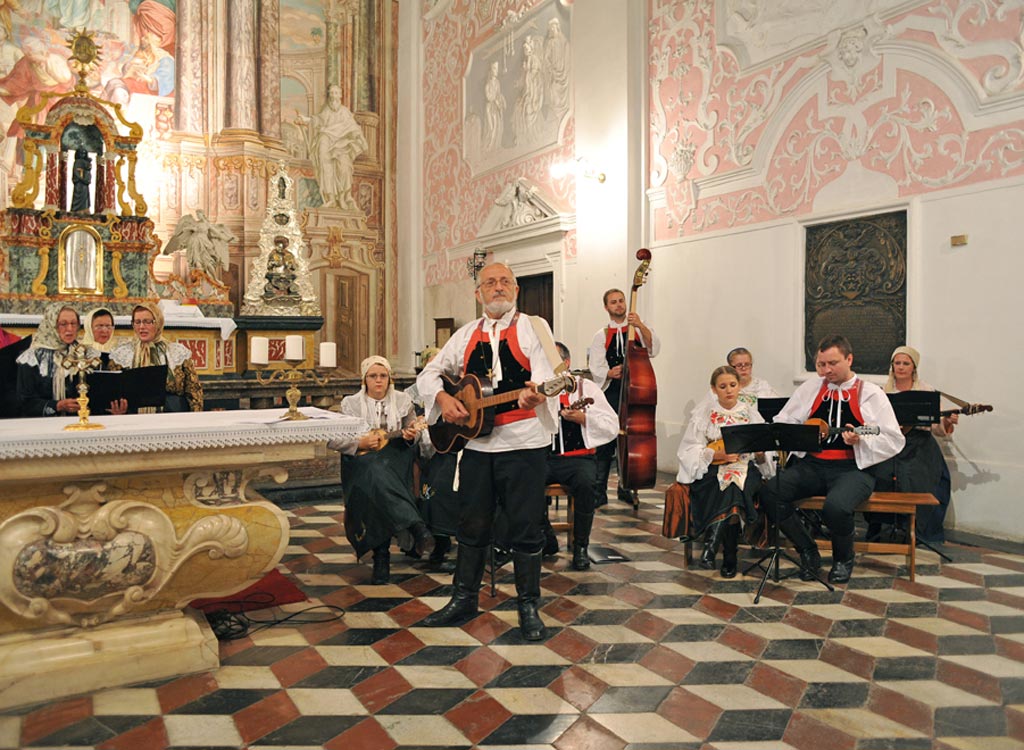